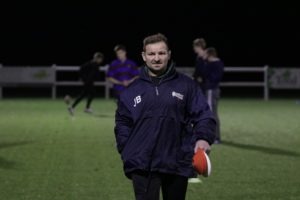 ‘‘Having risen through the ranks at Aylesbury Rugby club I progressed into professional rugby, playing and then coaching at the elite level. I won two Premiership winners’ medals and six England Saxon Caps. I then guided two high profile Championship clubs into Top 4 league positions as a coach and I continue to coach professionally today.

I’ve thoroughly enjoyed my journey in rugby to date and I often refer back to the values instilled in me as a developing player, such as commitment, honesty and resilience. I also focus fondly on the relationships I forged and the enjoyment I experienced from being part of a team. Although, in order to fulfill my rugby ambitions, I had to make sacrifices in relation to my further and higher education and subsequent potential career choices. Therefore I am very excited with the opportunity to support the academy’s integrated approach to enabling our students to continue their rugby development in combination with their further education”[/col2]

Page load link
We use cookies on our website to give you the most relevant experience by remembering your preferences and repeat visits. By clicking “Accept”, you consent to the use of ALL the cookies.
Cookie settingsACCEPT
Manage consent

This website uses cookies to improve your experience while you navigate through the website. Out of these, the cookies that are categorized as necessary are stored on your browser as they are essential for the working of basic functionalities of the website. We also use third-party cookies that help us analyze and understand how you use this website. These cookies will be stored in your browser only with your consent. You also have the option to opt-out of these cookies. But opting out of some of these cookies may affect your browsing experience.
Necessary Always Enabled
Necessary cookies are absolutely essential for the website to function properly. This category only includes cookies that ensures basic functionalities and security features of the website. These cookies do not store any personal information.
Non-necessary
Any cookies that may not be particularly necessary for the website to function and is used specifically to collect user personal data via analytics, ads, other embedded contents are termed as non-necessary cookies. It is mandatory to procure user consent prior to running these cookies on your website.
SAVE & ACCEPT
Go to Top